10. June 2018 at 11:25
by Nisha Meena
Our ancient religious texts and epics give a good insight into the water storage and conservation systems that prevailed in those days. Over the years rising populations, growing industrialization, and expanding agriculture have pushed up the demand for water. Efforts have been made to collect water by building dams and reservoirs and digging wells; some countries have also tried to recycle and desalinate (remove salts) water. 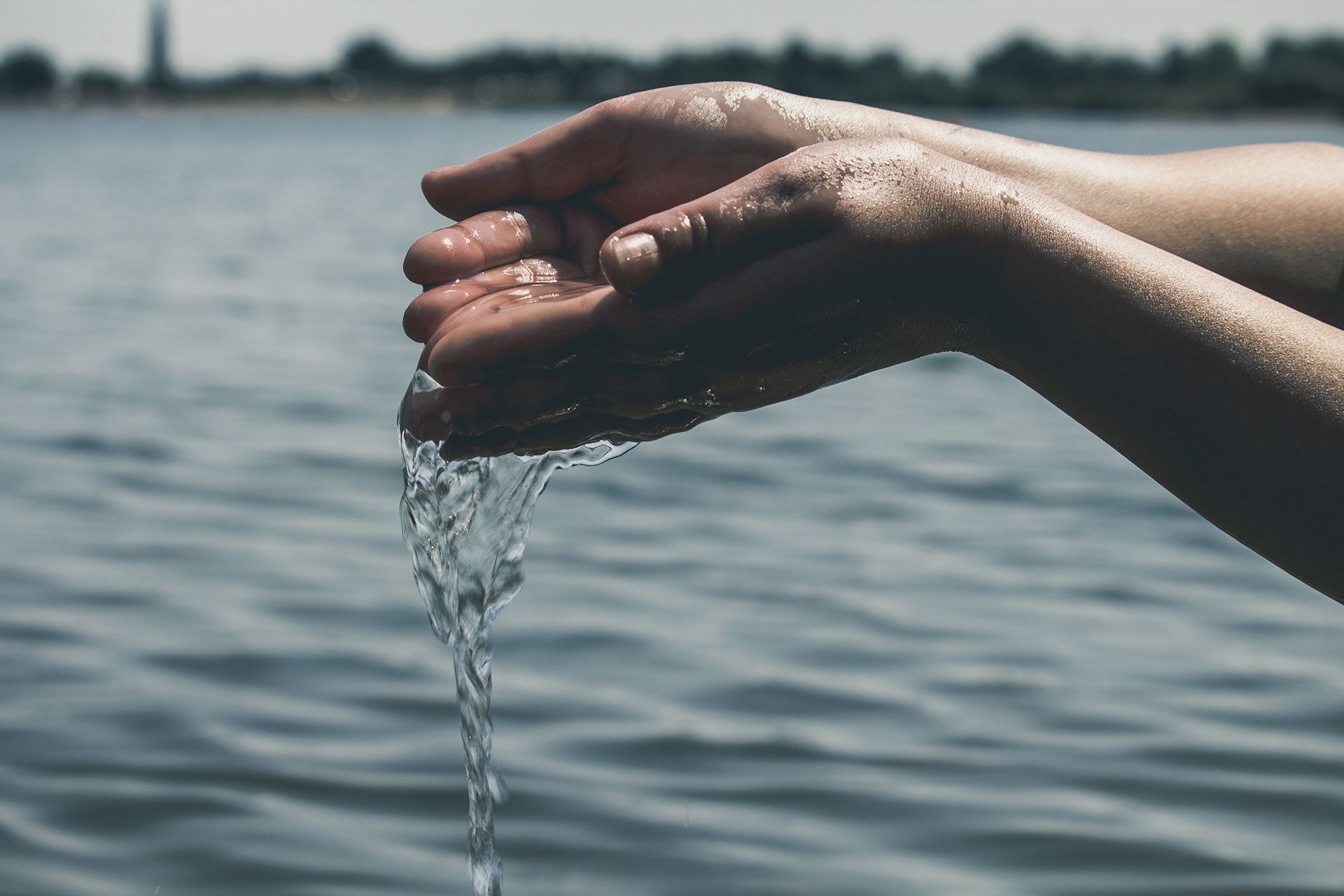 Water conservation has become the need of the day. The idea of groundwater recharging by harvesting rainwater is gaining importance in many cities. In the forests, water seeps gently into the ground as vegetation breaks the fall. This groundwater, in turn, feeds wells, lakes, and rivers. Protecting forests means protecting water 'catchments'. In ancient India, people believed that forests were the 'mothers' of rivers and worshipped the sources of these water bodies.

Water conservation includes all the policies, strategies and activities made sustainably manage the natural resource of fresh water, to protect the water environment, and to meet the current and future human demand. Population, household size, and growth and affluence all affect how much water is used. Factors such as climate change have increased pressures on natural water resources especially in manufacturing and agricultural irrigation. Many US cities have already implemented policies aimed at water conservation, with much success.

The goals of water conservation efforts include:
1. Ensuring availability of water for future generations where the withdrawal of fresh water from an ecosystem does not exceed its natural replacement rate.
2. Energy conservation as water pumping, delivery, and wastewater treatment facilities consume a significant amount of energy. In some regions of the world, over 15% of total electricity consumption is devoted to water management. Habitat conservation where minimizing human water use helps to preserve fresh water habitats for local wildlife and migrating waterfowl, but also water quality.
3. Some ancient Indian methods of water conservation

The Indus Valley Civilization, that flourished along the banks of the river Indus and other parts of western and northern India about 5,000 years ago, had one of the most sophisticated urban water supply and sewage systems in the world. The fact that the people were well acquainted with hygiene can be seen from the covered drains running beneath the streets of the ruins at both Mohenjodaro and Harappa. Another very good example is the well-planned city of Dholavira, on Khadir Bet, a low plateau in the Rann in Gujarat. One of the oldest water harvesting systems is found about 130 km from Pune along Naneghat in the Western Ghats. A large number of tanks were cut in the rocks to provide drinking water to tradesmen who used to travel along this ancient trade route. Each fort in the area had its own water harvesting and storage system in the form of rock-cut cisterns, ponds, tanks, and wells that are still in use today. A large number of forts like Raigad had tanks that supplied water.

In ancient times, houses in parts of western Rajasthan were built so that each had a rooftop water harvesting system. Rainwater from these rooftops was directed into underground tanks. This system can be seen even today in all the forts, palaces and houses of the region. Underground baked earthen pipes and tunnels to maintain the flow of water and to transport it to distant places, are still functional at Burhanpur in Madhya Pradesh, Golkunda and Bijapur in Karnataka, and Aurangabad in Maharashtra.


Rainwater Harvesting
In urban areas, the construction of houses, footpaths, and roads has left little-exposed earth for water to soak in. In parts of the rural areas of India, floodwater quickly flows to the rivers, which then dry up soon after the rains stop. If this water can be held back, it can seep into the ground and recharge the groundwater supply.

This has become a very popular method of conserving water, especially in the urban areas. Rainwater harvesting essentially means collecting rainwater on the roofs of building and storing it underground for later use. Not only does this recharging arrest groundwater depletion, it also raises the declining water table and can help augment water supply. Rainwater harvesting and artificial recharging are becoming very important issues. It is essential to stop the decline in groundwater levels, arrest sea-water ingress, i.e. prevent sea-water from moving landward, and conserve surface water run-off during the rainy season.

All you need for a water harvesting system is rain and a place to collect it! Typically, rain is collected on rooftops and other surfaces, and the water is carried down to where it can be used immediately or stored. You can direct water run-off from this surface to plants, trees or lawns or even to the aquifer.

Some of the benefits of rainwater harvesting are as follows:
Increases water availability; Checks the declining water table; Is environmentally friendly Improves the quality of groundwater through the dilution of fluoride, nitrate, and salinity; Prevents soil erosion and flooding especially in urban areas


Agriculture
Conservation of water in the agricultural sector is essential since water is necessary for the growth of plants and crops. A depleting water table and a rise in salinity due to overuse of chemical fertilizers and pesticides have made matters serious. Various methods of water harvesting and recharging have been and are being applied all over the world to tackle the problem. In areas where rainfall is low and water is scarce, the local people have used simple techniques that are suited to their region and reduce the demand for water.

In India's arid and semi-arid areas, the 'tank' system is traditionally the backbone of agricultural production. Tanks are constructed either by bunding or by excavating the ground and collecting rainwater. Rajasthan, located in the Great Indian Desert, receives hardly any rainfall, but people have adapted to the harsh conditions by collecting whatever rain falls. Large bunds to create reservoirs known as khadin, dams called johads, tanks, and other methods were applied to check water flow and accumulate run-off. At the end of the monsoon season, water from these structures was used to cultivate crops. Similar systems were developed in other parts of the country. These are known by various local names ¾ jal talais in Uttar Pradesh, the haveli system in Madhya Pradesh, ahar in Bihar, and so on.


Water Conservation
The most important step in the direction of finding solutions to issues of water and environmental conservation is to change people's attitudes and habits¾this includes each one of us. Conserve water because it is the right thing to do. We can follow some of the simple things that have been listed below and contribute to water conservation.

Try to do one thing each day that will result in saving water. Don't worry if the savings are minimal ¾ every drop counts! You can make a difference. Remember to use only the amount you actually need. Form a group of water-conscious people and encourage your friends and neighbours to be part of this group. Promote water conservation in community newsletters and on bulletin boards. Encourage your friends, neighbours and co-workers to also contribute. Encourage your family to keep looking for new ways to conserve water in and around your home.Make sure that your home is leak-free. Many homes have leaking pipes that go unnoticed.Do not leave the tap running while you are brushing your teeth or soaping your face. See that there are no leaks in the toilet tank. You can check this by adding colour to the tank. If there is a leak, colour will appear in the toilet bowl within 30 minutes. (Flush as soon as the test is done, since food colouring may stain the tank.)Avoid flushing the toilet unnecessarily. Put a brick or any other device that occupies space to cut down on the amount of water needed for each flush. When washing the car, use water from a bucket and not a hosepipe.Do not throw away water that has been used for washing vegetables, rice or dals¾use it to water plants or to clean the floors, etc. You can store water in a variety of ways. A simple method is to place a drum on a raised platform directly under the rainwater collection source. You can also collect water in a bucket during the rainy season.