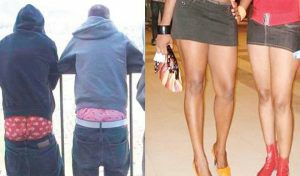 The management are beginning to express fears over the spate of indecent dressing on our campus, especially by ladies, noting this phenomenon, that was once alien to Africa, is gradually becoming a norm and is contributing to the increase in the rate of immorality and other ills plaguing the society and campus.

Recalled that, the management through the student affairs division in collaboration with the security unit ordered the men in blue (Security) to be chasing back to hostel any student seen dress indecently. The men in blue are mounted at various corner in the university at early hour of the day assessing the outfits of every students particularly ladies.

Looking from a far, one we understand that, the university strongly believes that proper dressing is an act which is necessary to excel in one's field, and needed in life after graduation. The way you dress determines the way you are addressed. Dressing decently enables one to gain respect from lecturers, fellow students and even in the entire academic community. It is also a proactive measure that reduces prevalent societal problems such as rape and other forms of sexual assault.

This development, despite the advantages, does not go down well with some students. "Dress code is just a way to restrict the freedom of students". This was the belief of some students. However, for the greater good, there is existence of laws. Aggrieved students have no choice other than to comply with the university rules and regulations.

Everyone knew that University is designed to be an institution for academic literacy and also should be a platform for moral training. Usmanu Danfodiyo University is known to train students in character and learning; thus, only students proven to be successful in both aspects are awarded degrees.

Berating the act of indecent dressing, some students see no reason why some students are dressing indecently to displease their creator. They nurture the opinion that indecent dressing also has a negative effect in the academic environment. The reasons of which are justified by the level of distractions attributed to immoral dressings which takes its toll on students and unguarded lecturers. While some students have expressed mixed reactions on action taking by the management of the university on indecent dressing.