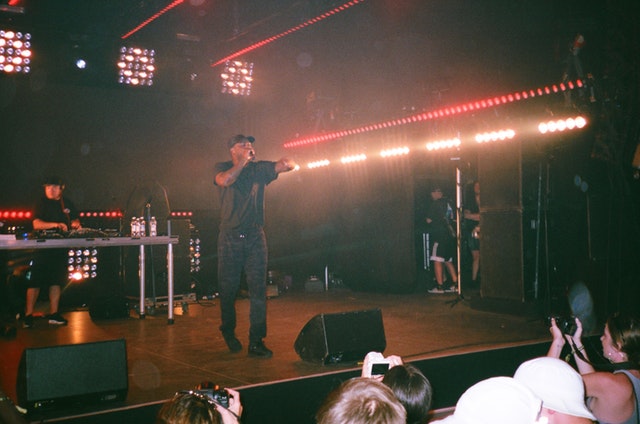 He had to change a lot of schools due to his mother moving from place to place frequently and that resulted in a lot of bullying, mostly just for him being ‘the new kid’. He briefly explained the bullying incidents in his songs  ‘Brain Damage’ (where he expresses how he felt being bullied by D’Angelo Bailey) out of the ‘The Slim Shady LP’ (his second studio album released in 1999) and ‘Legacy’ (where he explains how he was bullied and how hip-hop helped him rise above it) in ‘The Marshall Mathers LP II’ (his eighth studio album released in 2013).

Also, bullying was not the only problem that Marshall had to face when he was young. His mother was fond of using a drug called ‘Valium’ (a drug used to cure anxiety by generating calming effects) due to some of her own issues. Moreover, she fed those pills to little Marshall for many years. Eminem briefly explained these events in songs such as ‘My Mom’ (where he explains how his mother made him a valium addict by adding the drug in his food) in ‘Relapse’ (his sixth studio album released in 2009) and the heart-wrenching song ‘cleaning out my closet’ (where he expresses his anger for his mother) in ‘The Eminem Show’ (his fourth studio album released in 2002).

All these issues are more than enough to demoralize a kid and in spite of all of them, Eminem found his power in hip-hop music. Young Marshall used to bang his head back and forth while listening to hip-hop music. This was explained by his mother and grandmother in the documentary titled ‘The Life Of Marshall Mathers’.

The English language and hip-hop music were the only two things young Marshall was fond of. He used to carry a dictionary with him all the time in order to make sure that he can add any new words that he comes across into his vocabulary.

The Man who introduced Eminem to hip-hop music was his uncle ‘Ronnie’ and soon Marshall started to write his own lyrics (when he was 14-years-old). In 1991, Ronnie killed himself over a girl. Young Marshall was devastated as Ronnie was his only role model at that time. This made him more dependent on hip-hop music and he started writing more and more lyrics. Soon after that, he teamed up with his friend ‘Proof’ (DeShaun Dupree Holton) to take part in local Rap Battles.

He initially had to face a lot of criticism due to the color of his skin as hip-hop was known to be an African-American art form. However, people used to change their opinions after hearing him spit (a term used in hip-hop, meaning ‘speaking’). He even went on to be the runner up of the ‘Rap Olympics’, losing to the rapper Otherwize. That’s when people started to know the name ‘Eminem’.

Eminem released his debut studio album ‘Infinite’ on November 12, 1996. Unfortunately, the album was a flop. This broke Eminem’s heart and he even attempted suicide. That’s when he had a life-changing idea that gave his career the spark it needed. That’s when he invented his alter-ego, Slim Shady (the evil and mischievous side of Eminem).

He released the Slim Shady EP on December 16th, 1997. That’s when he hit the ears of Dr. Dre (Aftermath Records) and Jimmy Iovine (Interscope Records). Eminem Teamed up with Dr. Dre to release his second studio album and his first sky shattering hit album  ‘The Slim Shady LP’. The album sold many copies and proved to be something that Eminem needed very badly.

He went on to open his own record label ‘Shady Records’ that gave him all the rights of the music created by him. In 2002, a movie based on Eminem’s own life ‘8 Mile’ was released. The movie portrayed the struggles of a white rapper trying to make a name for himself in the harsh parts of Detroit, Michigan. The song ‘Lose Yourself’ from the soundtrack of the movie went on to win an academy award for the best original song.

Eminem released many great songs and albums after that and just last year, he took the world by storm when he released his ‘Kamikaze’ album as a surprise. People say that he brought back ‘Slim Shady’ in the Kamikaze album and this can be seen in his most recent works after the release of the album.

Eminem truly has an amazing and inspiring story. A story that we can all learn a lot from. Especially, the most important lesson a person can ever learn, a lesson to ‘Never Give Up’.