19. July 2017 at 19:23
by Ram Neupane
The program was a grand success as the large number of participants involved actively. We received significant amount of queries about the membership procedure for YPPO by non-YPPO participants. We have given them the link to YPPO website. This program was successful in drawing attention of scientific minds to YPPO and has given a new hope to them about the role of YPPO to influence the future. 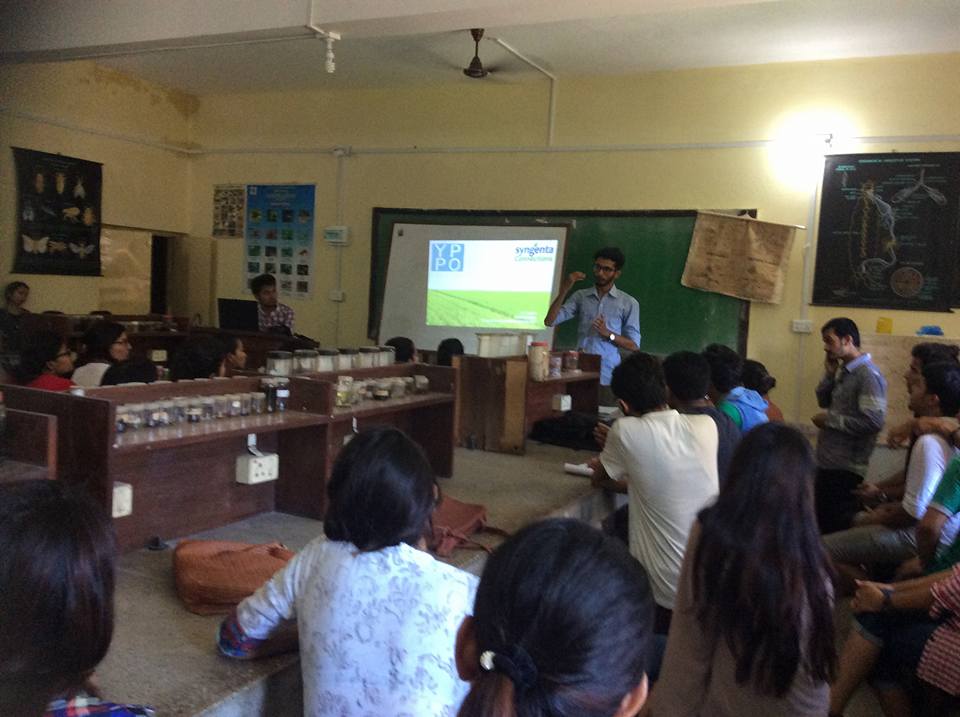 Part One: YPPO-Nepal Introduction by Kailash Pandey
In the first part, Kailash Pandey, executive member of YPPO-Nepal presented the brief introduction of YPPO and its objectives. His talk was focused on Youth Mobilization and Responsibilities in Scientific Issues in relation to YPPO. His 15 minutes long presentation oriented YPPO members and motivated others to join the YPPO network. He emphasized that primary responsibility of youths involved in science is to conduct scientific activities and find scientific solutions to the conservation related issues of modern world.

Part Two: Experience Sharing and Presentation on Precision Farming Technology by R.C Neupane
YPPO-Nepal representative R.C Neupane presented an hour long presentation on the second half of the workshop. He shared his experience during his visit to Vietnam as the National delegate to Syngenta USAID Ag Students Connection program. Furthermore, he talked about Precision Farming Technology based on the MimosaTek water irrigation technology. He explained about the feasibility and possibilities of this innovative technology in Nepal which has significant amount of smallholder farmers. At the end of his presentation, there was Question Answer session. Participants raised their curiosity about the applicability of precision farming technology by the poor small holder farmers of Nepal. Mr. Neupane’s presentation gave a direction and insight to participants about the scope of Modern Agriculture and the energy and vision he has associated with YPPO-Nepal.

Part Three: Presentation on Gene Therapy: Prospects and Possibilities by Prof. Dr. I.P Kadariya
On the third part of the workshop, Dr. Kadariya, Director of Center for Biotechnology of AFU presented on Gene Therapy. His presentation was based on his PhD Dissertation on Gene Therapy. Dr. Kadariya conducted the research on china and received the international award for his work. Participants were eagerly involved in the interaction about the new topic of molecular science. His talks were focused on the possibilities of Gene therapy to cure the present day challenges of Medical Science like Cancer. His talk about gene sequencing and gene transfer gathered attention. Participants were excited about the comparison of performance of normal mice and transgenic mice on the ovarian cancer. Dr. Kadariya received many questions from the participants. The questions were diverse ranging from the limitations and ethics of gene therapy to the possibilities of this technology in developing country like Nepal. His presentation was of about an hour and half. Inclusion of presentation on Gene Therapy on the workshop impressed the scientific motive of YPPO to solve the problems.

Conclusion
The program was a grand success as the large number of participants involved actively. We received significant amount of queries about the membership procedure for YPPO by non-YPPO participants. We have given them the link to YPPO website. This program was successful in drawing attention of scientific minds to YPPO and has given a new hope to them about the role of YPPO to influence the future.