For a Nation known for devastating terror attacks in major of her city epicenter, the Notre Dame Fire incident was a sad remainder of pain, anguish, and torment as Parisians watched with folded arms engulfed in hot tears seeing yet another tragedy befell a nation whose beleaguered history with terrorist knows no bounds. 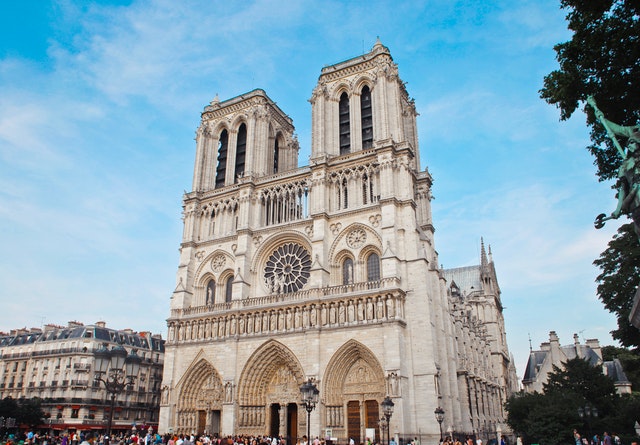 The French capital was taken aback Monday 15th April, 2019 as they watched in solemn torrents, torments, and avid torture, the massive fire as it emanates through one of history most treasured architectural heavyweights. It was an evening of saddened shock as millions around the globe saw the iconic Notre Dame cathedral building flamed up at the heart of the beautiful city of Paris on Monday, altering the city's skyline and threatening a potent symbol of France chequered history.

For a Nation known for devastating terror attacks in major of her city epicenters, the Notre Dame Fire incident was a sad remainder of pain, anguish, and torment as Parisians watched with folded arms engulfed in hot tears seeing yet another tragedy befell a nation whose beleaguered history with terrorist knows no bounds.

The Notre Dame de Paris (Our Lady of Paris) from time immemorial has been a Catholic Cathedral on the Île de la Cité in the 4th arrondissement of Paris, France. Believed to be one of the world’s most recognizable architectural pieces of art, the Notre Dame is a perfect example of France most finely Gothic architectural design model. With a state of the art use of rib vault and flying buttress, it mightily fixated and elegantly poises rose windows and the naturalism and divinely abundance of sculptural décor makes it a standalone historic monument of architectural divinity entirely different from earlier Romanesque designs and model.

The 14th century medieval structure spanning over 800 years of existentiality was completed for the first time in 1345 after a ground breaking laying in 1163. With a length of 128m (420ft) and width of 48m (157ft), the Notre Dame is known for her two towering structure facade 69m (229ft) alongside her iconic spire height and roof structure which gives this building her true elegance and wonderful radiance of a magnificent art work.

During the 1970’s the Cathedral Notre Dame de Paris survived absolute desecration during the French revolution, witnessed and survived two world wars, but alas, fell prey to an involuntary fire accident Monday April 15th, 2019 after the most revered structure in historical annals blazed up in flames to the astonishment of all. No doubt, it was sight full of bewilderment as both French nationals and non-francophone nationals mourned the “Great Fall of Notre Dame”.

“Notre Dame is one of the world’s great treasures. It’s in our nature to mourn when we see history lost-but it’s also in our nature to rebuild for tomorrow, as strong as we can”- Barrack Obama.

It was a shock no one saw coming as Parisians sang songs of healing praying same that this cup passes over them even in their moment of trial as they watched the Great Notre Dame building that has played host to over 13 million visitors annually fall bitterly in flames. It was a nine hour long battle as over 400 hundred fire fighters fought gallantly and dutifully to save one of history most treasured building from a total collapse as they hurried on to saving also a majority of her Holy Relics most especially the crown of thorns believed to been worn by Jesus during the passion of Christ.

An inferno which will eventually alter the face of one of the finest tourist’s location in historical mileage;

Rebuilding the Notre Dame: With so many pledged funds earmarked for the rebuilding of the awe inspiring Cathedral that embodied the heart of Paris for over 800 years, the big question remains thus; “Will the Notre Dame ever remain the same”? For a medieval structure that took over 200 years to complete, rebuilding the Notre Dame in this present day and age might need just more than money and pledges to regain her self-worth and absolute reign as one of history most recognizable architectural model.

Indeed, this has become pertinent to prod regardless of the confidence level of Emmanuel Macron when he noted that the Notre Dame will be rebuilt within the space of five years. According to experts, the French President could be on a sail of wishful thoughts as many experts says rebuilding of this structure may likely take 10-15 years giving the architectural frame work and medieval elegance that forms the fulcrum of this wonderful piece of art work.

Though, the Notre Dame may have fallen prey to an involuntary fire, but it’s sure not defeated as France could borrow solace from the rebuilding of the Windsor castle whose building gut fire in 1992.