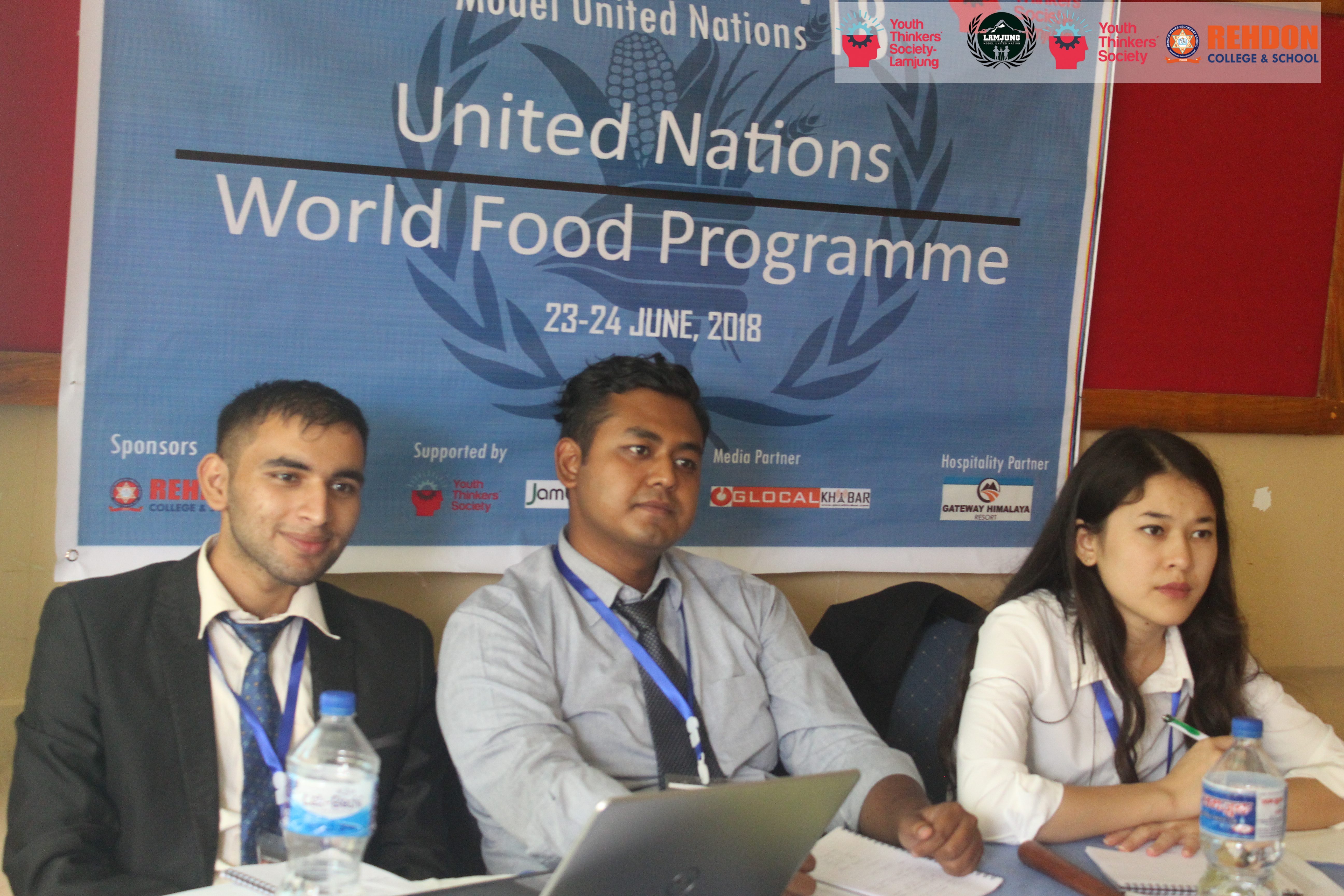 There were two committees World Food Program and Economic and social council. I was dais member in WFP Committee as Co Chair. It had Mr. Rohit Tandulkar as Chair and Miss Pallavi Shrestha as Director. The following resolution was made during the committee session of the WFP Committee.


The General Assembly
Affirming the establishment of WFP with the support of UN General Assembly Resolution A/Res/1714 of 1961. Reminding all nations of the celebration of the 50th anniversary of the Universal Declaration of Human Rights, which recognizes the inherent dignity, equality and inalienable rights of all global citizens. Reaffirming its Resolution 33/1996 of 25 July 1996, which encourages Governments to work with UN bodies aimed at improving the coordination and effectiveness of humanitarian assistance. Concerning the resolution of the 97th UN General Assembly, 2008 which recognized the right of all refugees and internally displaced persons regardless of ethnicity. Recalling the World summit on Food Security Rome, 16-18 Nov 2009 aimed to eradicate hunger from the face of the Earth. Reminding the High-level side event on pathways to zero hunger, 2016 on 71st UN general Assembly aimed on achieving zero hunger and sustainable development goal by 2030.


1. Calls upon to manage a task force under WFP to present research paper on food waste management and technology to decrease post-harvest loss
a. Affirms WFP to have sole responsibility of analyzing all the factors regarding food waste Management.
b. Authorizes the task force to provide mitigating measures to the Problem.
c. Calls upon the establishment of food supply system to the affected areas from the countries with excess agricultural production.
d. Proper transportation and comparative advantages in production aspects to reduce post-harvest loss.
e. Value addition through product diversification.
f. Cultivation of varieties having longer shelf-life.

2. Further reminds the member state to work under Paris agreement in order to minimize displacement and food insecurity due to climatic Hazards

3. Recommends the member nations to establish an agency to facilitate exchange programs between member states in agricultural practices to improve agricultural production and empower capital, labor forces and resources.
a. Encourages the developed nations to provide aid in development of technological advancements in agriculture in developing and underdeveloped nations.
b. Hopes from the member states to provide qualified technicians to facilitate agricultural trainings to the affected Population.

4. Encourages the member states to provide temporary work permit in host nations and land on lease facility for displaced Population.
a. Authorizes UN acting as moderator between both parties.
b. Emphasizes that work is provided to vulnerable group with host country Consensus.
c. Provision of Land Bank Act.

5. Urges to monitor the assurance of food availability to targeted population in co-operation between WFP, FAO, UNHRC and UNICEF and local governmental bodies.
a. Encourages the host countries and neighboring countries to provide humanitarian assistance to the affected area.
b. Further requests the developed nations to provide technical assistance like vehicles and therapeutic assistance.

6. Encourages to make a food reserve system for emergency response to food crisis in affected Region.
a. Expresses its hope that each country shall voluntarily contribute for the Purpose.
b. Approves the stored food shall be used under secretariat by WFP and FAO at crisis period only.
c. Supports the establishment of food storage facility in regional Basis.

7. Requests the member nations to work on water management system for better agricultural production.
a. Further recommends the nations to implement water efficient farming system throughout the globe.
b. Expresses its hope that the developed nations provide aid and support for establishment of sewage management facility in developing and underdeveloped countries.

9. Suggests nations to invest on research of genetically engineered varieties and single cell protein and its implementations on better crop production to meet food crisis Situation.