13. February 2019 at 14:08
by Bisma Shamsi
The Indus River dolphin, locally known as “Bhulan” or the “Blind dolphin” is one among the South Asian River Dolphins and is one of the world's rarest animal that is the second most endangered freshwater dolphin species in the world. 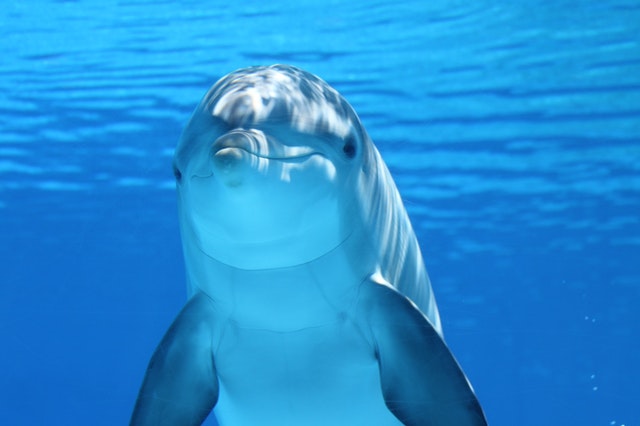 A flagship species, this dolphin is an indicator of the biological health of the aquatic and terrestrial environment adjoining the Indus River. It is found exclusively in freshwater, living not only in the main channels, but also, during the flood season, in seasonal tributaries and the flooded lowlands. The scientific name for the Indus river dolphin is, “Platanista gangetica minor”. The Indus river dolphin is one of around 80 known species of cetacea and one of around 40 known species of dolphin.

Due to their apparent small population size these marine mammals are currently considered endangered and hunting them is considered illegal. The Blind Dolphin has a long beak and a stocky body. It has a low triangular hump on its back in place of a 'true' dorsal fin. It is gray-brown in color, sometimes with a pinkish belly. The eyes are extremely small, resembling pinhole openings slightly above the mouth.

Blind dolphins are functionally blind having evolved without a crystalline lens or well-developed light-sensitive organ. However, this is not a disadvantage but an adaptation to living in the silt-laden turbid waters of the Indus where eyes are virtually useless, as very little light penetrates below the surface of the murky water.

The Indus River dolphin feeds mostly on several species of fish and invertebrates. It does much of its feeding at or near the bottom, using echolocation, swimming on one side, and probing the river bottom with its snout and its flipper. Although it is not usually considered to be gregarious, relatively high densities are found at sites where rivers join, in areas where the current is relatively weak, off the mouths of irrigation canals, and near villages and ferry routes.

In Pakistan, the blind dolphin is found in a small area of Indus River near Sukkur in the central Sindh province of Pakistan. It is endemic to the Indus River system in Pakistan and is listed as endangered in the International Union for the Conservation of Nature (IUCN) Red List of Threatened Species due to an 80% decline in its habitat range as a result of the construction of barrages along the river (which has divided the population into five sub-population) as well as from water pollution, stranding in irrigation canals and accidentally becoming caught in fishing nets.

People who live by the Indus River call the dolphin “susu” (an Urdu word) after the sound it makes – a sneeze-like breathing sound. These have a long pointed beak; the teeth are visible in both the upper and lower jaws even when the mouth is closed. They have a stocky body. And a low triangular hump on its back in place of a ‘true’ dorsal fin. It is gray-brown in color, sometimes with a pinkish belly. The eyes are extremely small, it does not have a crystalline eye lens, rendering it effectively blind, resembling pinhole openings slightly above the mouth, although it may still be able to detect the intensity and direction of light.
#
Navigation and hunting are carried out using echolocation. It does much of its feeding at or near the bottom, swimming on one side, and probing the river bottom with its snout and its flipper. The Indus River dolphin feeds mostly on several species of fish and invertebrates. A WWF Pakistan study in December said the number of the blind dolphin, is on the rise which is a significant positive development despite pollution threat.

In its report titled ‘Signs of Hope for the Endemic and Endangered Bhulan,’ WWF Pakistan noted that the species, almost at point of extinction a decade ago, has increased in number from only 1,200 in 2001 to 1816 -1900 in 2017.