Venice has abundant art treasures. Many cover the walls of the city's elegant gallery, the Accademia, but the best still remains in the places where they were painted: the churches and palaces of the Renaissance. This is an excellent guide to Whatsonwhen's favorite masterpieces, yet to be found in their original homes. 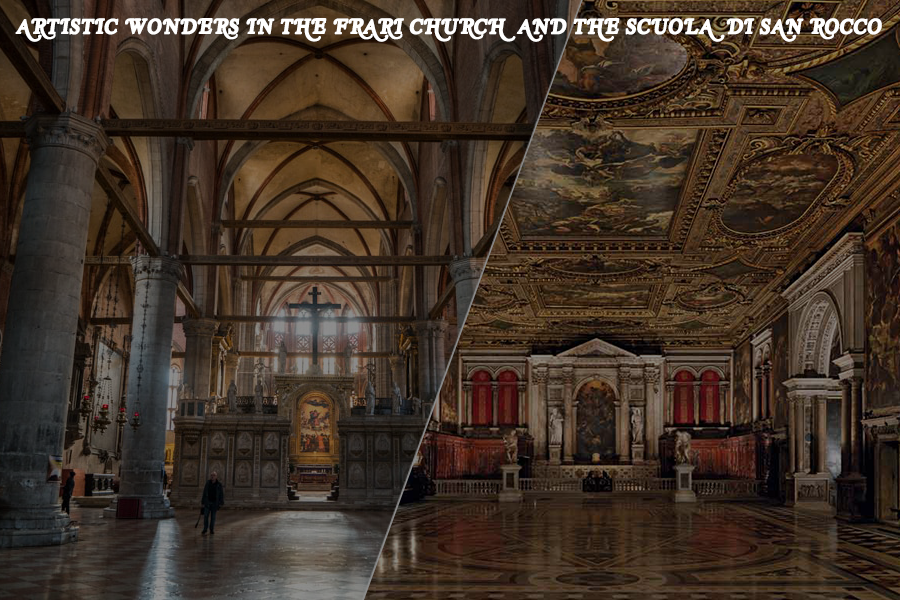 Like the great city-state itself, Venice's Renaissance painters developed along unique lines. They were great colorists, more sensuous, and less austere than their Florentine and Roman counterparts. They tempered the sculptural monumentality of Michelangelo with a Byzantine exoticism of lush coloring and, in the case of Tintoretto, dramatically looser brushwork. Their work is about light and color. Their sense of fragile mortality seems poignantly suited to a city that is sinking and decaying, ever at risk from the floods that will one day surely destroy it.

Entrance to the Franciscan Frari is off the little Campo dei Frari to the northwest of the final loop of the Grand Canal before it reaches the lagoon. Reach it by wandering up from the Accademia or cross the Rialto from the old city centre and head due west. You are bound to get lost. It would be a mistake not to, it's part of Venice's charm.

The Frari is a gothic church, begun in the 1330s. Vast and austere with a long towering nave, you enter at the bottom of it, flanked by paintings as soon as you go through the door. Do not be distracted but look straight ahead for the Frari's most crucial work. This masterpiece is positioned above the high altar, Titian's Assumption of the Virgin (1516-18). As you walk down the nave towards it, it is as if the stark, soaring architecture of this church was built as a symphony to the painting, a vortex that pulls you towards the image. The approach is a religious experience, and, accustomed as we are to seeing art only in galleries, an insight into the absolute power of paintings in situ. The eye is drawn up in wonder to the painting, as the Virgin herself, hovering above the apostles, looks up to God the Father, and as the church architecture above him soars up even further, offering its own sort of prayer. This was the largest and most sophisticated altarpiece ever painted in Venice. It is astounding.

Just before you come too close, look to the left, and there is another giant Titian, the Pesaro Madonna (1519-26). This was commissioned by the Pesaro family, which it depicts praying to their Lady. The impact of two huge paintings is immensely powerful.

For something gentler, turn to the right of the high altar into the little sacristry - also commissioned by the Pesaro family. Here is the third altarpiece of complete contrast: small, set across a table, still in its original golden frame, a triptych by Giovanni Bellini: Madonna and Child with St Nicholas, Peter, Benedict and Mark (1488). Henry James said it best: "Nothing in Venice is more perfect than this. It is one of those things that sum up the experience of life, genius of a painter. It seems painted with molten jewels, which have only been clarified by time, and it is as solemn as it is elegant and as simple as it is deep."

Neither Titian nor Bellini can prepare you for the savage intensity of the Tintorettos that cover the walls of the building around the corner, in the Scuola di San Rocco. To get there, walk around the outside of the Frari to the Campo San Rocco. Where Titian is majestic and Bellini serene, Tintoretto is somehow the most moving. From the years 1564 to 1587 the artist covered the two floors of this building with one of the most essential Italian painting cycles ever painted. Like the two huge Titians, the sheer quantity of so much art is quite staggering: when normally we get excited to see a single portrait by one of these masters, to see picture upon picture makes the senses reel.

Tintoretto's cycle of paintings tells the story of the Crucifixion, the Nativity, the Resurrection and other Biblical stories. They lined the walls of the huge ground floor room, you first pass through and are even more abundant in the upper hall, at the top of the grand staircase you climb.

As you enter the upper room, walk to your left, and turn into the smaller Albergo. You are hit by the Crucifixion, covering the entire end wall. It is massive, dark, apocalyptic, and heartbreaking. This is a Christ in terrible pain, closer to Durer than Giotto, a seeming mortal making the greatest sacrifice we can conceive of. It is an upsetting, disturbing picture, all the more so for the way we are dwarfed by it in the room. You seek to escape its power, walk forward, look about you, but behind is a huge Ecce Homo, flanked by a noble Christ Before Pilate. The claustrophobic dimensions of the room, an image everywhere you look, fling the viewer into the center of the drama: you too mourn at the feet of the cross, call for Christ's blood in the crowd before Pontius, mock him for his thorns.

The spontaneous effect of the artwork of the Frari Church and the Scuola di San Rocco is that it transports the modern viewers back to the world of the people who first viewed these paintings. Appreciating these pictures is today, as it was 500 years ago, a profoundly spiritual, even transforming, experience. After these, paintings in galleries somehow seem castrated: nomadic, pale imitations of what art was meant to be.