14. June 2019 at 14:57
by Vlad Chevachin
Patrick has gone through a fantastic life path: from a simple student and the creator of a rock band back in 1969 to a famous person and leader of the Youth Assembly at the United Nations. Following his goal - to benefit society - he continued to reach new heights, which the young idealistic Americans of his era always dreamed of. This article will inform you about an amazing person in capital letters! 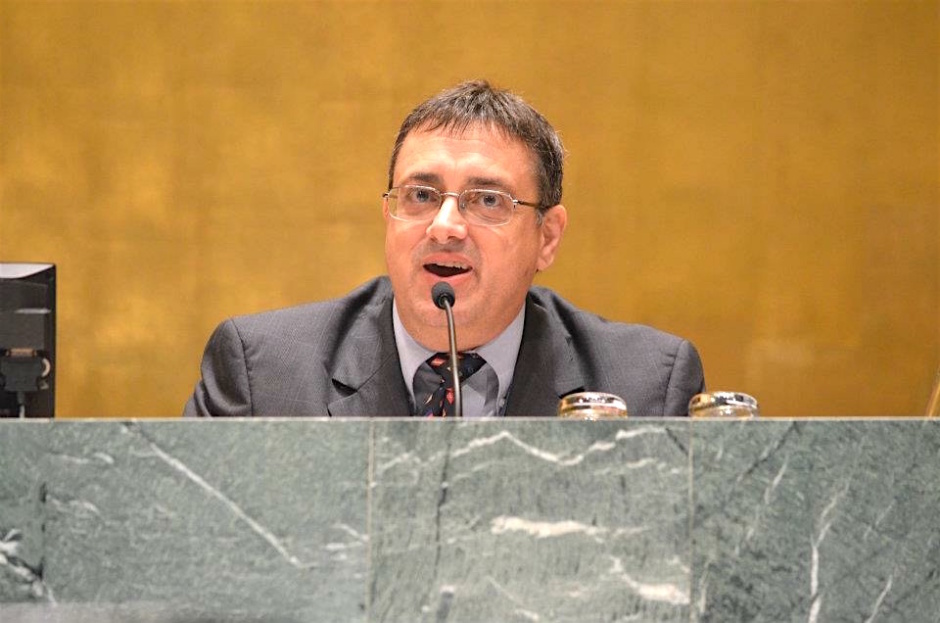 “(Your) mission is so important, and… you are accomplishing remarkable things. Best wishes to you and everyone at the foundation!” (President William Jefferson Clinton for Patrick Sciarratta).

Patrick has gone through a fantastic life path: from a simple student and the creator of a rock band back in 1969 to a famous person and leader of the Youth Assembly at the United Nations. Following his goal - to benefit society - he continued to reach new heights, which the young idealistic Americans of his era always dreamed of. Patrick is an internationally recognized youth trainer, editor of the "NGO Reporter" and "Global Connections", founder of "The Vinculum Foundation" and a famous public figure. This article will inform you about an amazing person in capital letters!

I learned about him long before our acquaintance. From the UN rostrum, he seemed to me a very important person. A few years ago I could not imagine that I could talk to him. Time passed and thoughts turned into reality. All people who have ever worked with Patrick note his great responsiveness and serious attitude to work, the ability to clearly perform his tasks while just being a pleasant conversationalist. I am convinced of it, personally.

V.C. - How is work at the Vinculum Foundation? Who can benefit from financing NGOs?

P.S. - The foundation works in such a way that NGOs can obtain re-grants through support from individuals, corporations, and family funds. Those who donate receive a tax break. You see, Vinculum vets the funds that some NGOs are skeptical of taking because they fear it might be tainted, for example, by corruption, the sale of weapons, or drugs. Vinculum vets the donor to see if they are safe to accept funds from. All this strengthens civil society OUTSIDE of the politicians in power. I am in contact with funders who want to help support UN public programming.

- Can people from other countries participate in this program?

- Yes. Most of the projects for recommendation are international in scope, not US-centric at all. It could certainly be a Russian project - I don’t create the projects, I respond to funders who want me to take responsibility for sending their money to causes that will promote the UN, in NYC or around the world.

- How did you meet President Clinton?

- He invited me to be his Presidential Representative at a major DC conference. He asked a board member on the NGO where I used to serve to recommend someone. I was later in Eastern Europe with him, when I was working on cultural exchanges for peace.

- How did knowledge of anthropology and theater help you in your social activities? (This is Patrick's specialty education).

- Tremendously. Theatre is like the religion of the masses. It permits us to tell the greatest truth through the greatest lie (no one really dies in Hamlet!). Anthropology allows us to discern the commonality among all humans, across cultures. I wanted a way to understand my fellow human beings beyond politics or the daily screens we hide behind, as well as identifying a way to creatively interact worldwide, without the drawback of language. Voila!

- You were a Special Advisor to the Permanent Mission of Sao Tome and Principe to the UN? Do you have any connection with this African island?

- This was in connection with the foundation I later created. It was the beginning of the Vinculum idea. I had no connection to them but they wanted higher profile and to create support structures for Ebola cures. I did all that for them, and more, as one of their representatives at the UN. I was never involved with creating or addressing policy for them but enabling the loudest megaphone for the dissemination of their interests (public relations work to keep the Ebola Crisis in the public eye).

- I contacted Calisto Nascimento, President of the National Youth Council of Sao Tome and Principe, and asked what the youth know about your work for their country. He conveyed greetings to you: “Mr. Patrick worked with Sao Tome and Principe at the United Nations several years ago. His work helped the development of our country at the international level. I think it is very important that cooperation between countries always takes place in a friendly diplomatic atmosphere.”

- All national youth councils are related to the World Assembly of Youth, where I will present the keynote address in June 2019. I am grateful for their support.

- What will this keynote address be about?

- How serious is this problem in your opinion? How can the state and civil activists influence the prevention of the publication of fake news?

- The term "fake news" is used by autocratic dictators in my opinion. The real issue is mis-Information, dis- and mal- Information, "gaslighting" (a method to make a person doubt the adequacy of his perception of the surrounding reality). Making the truth unreal by design and making things that sound like fact, but aren’t, available to feed into people’s predisposed fears, hatred, prejudices, and religious beliefs. It is a huge problem today due to the proliferation of new platforms for hate speech among the public and coercive lies spread by dishonest, power hungry ‘leaders’.

- What does it take to be as involved as you? Can a simple person become a leader of a Youth assembly at the UN?

- Guts, stupidity, determination, not understanding the word ‘no’, being open to ‘the other.’ I came from nowhere and just kept meeting people, respecting them and asking them their opinions, distilling what I saw as the seminal issues before me. I found the widest support audience first through sharing the arts, and then moved to serve those I thought were best fit for the projects at the UN which I was creating. The Youth Assembly at the UN was my idea for the next step.

- Which society can be called the most cultural in your opinion?

- Actually ‘the best in the world’ are everywhere. I despise arts awards. That is just as bad as the politicians abusing art, but this is for commercial gain, only. The arts should never seek awards: great art should all be equally respected. And there are countless cases where arts awards panels are polluted by both political and commercial operatives who want safe, commercially viable ‘art’ always to be seen as best (for obvious reasons?).

- For example, Eurovision-2017 in Ukraine, where Russian singer Yulia Samoilova was not allowed?

- Art is co-opted by the commercial and political regularly, everywhere, for good or evil. Remember that everything is usually in balance, so the number of politically charged decisions on one side are usually met with an equal reaction from the opposite side (Einstein proves this in theory). Each and every reaction has an equal but opposite reaction. That is a truth of life. Bottom line is that the arts need to just remain the arts and not be affected by people or leaders whims. In the end, Ms. Samoilova will keep being adored by loving audiences elsewhere and that one audience will suffer because, in this case, of politics. Yet that will eventually change.

- How do you see the future of your country?

- I look forward to the rise of spirituality and the decline of organized religion; I look forward to women taking a much more active role in politics; I hold dearly to the human rights advocacy within the United Nations structure. I wish there were funds for more mental health care, worldwide. There are too many certifiably insane people out there, undiagnosed and who should be receiving help, not just medication.

- Are you proud of your country?

- I find it funny when I hear people say they are proud to be a part of their country, as if they were more than the mere accident of birth. How can I be proud to be an American? I didn’t audition for this position. I am FREAKING LUCKY to have been born a white male, in the USA, during an incredible moment of prosperity, freedom, and liberation. I give thanks for that daily. But proud: how? If I audition for a play and get the lead role, of course I am proud: I earned that. But there are many who feel proud for absolutely no reason and I’d hate to be one of those.

- What is the hardest part of your job? (At the UN or other large organizations)

- As always: finding funding and the individuals we need to convince others to move the ball forward. It’s a Machiavellian world and those in power always want to know what is in it for them. My job is always getting those on the side of light to act as a team and brighten the light, not diffuse it with personal ego needs. The ‘hardest part’ or ‘problems’ imply road blocks. I don’t have problems; there are merely a variety of situations. Situational thinking sees simply what is and looks for ways to improve. As Buddhism shows, sometimes the simplest path is the most difficult for people to take.

- Are you satisfied with your choice - "devoting a life to society"? Have there been instances when you would like to give up on this and live a normal life, like everyone else?

- No, I am very satisfied and content. Who knows where another life would have led? Remember: Be Here Now. The best thing we can all do is take what is good, in our lives, our families, our towns: and make it better for all. Creating higher levels of consciousness helps all boats float at a higher level. Reducing fear and ignorance is a joy, not a task - and I rely on the youth, with whom I have always worked closely, to understand that the future is now and the moment is ours.

Thanks to Patrick for his invaluable contribution to youth policy, he is a real hero of our time. If there are other such people in the world, youth will achieve new successes! No matter where you live, it matters how you change the world! Patrick Sciarratta showed us all that nothing is impossible. All you need is to love your work and be open to people.

Cite This Article As: Vlad Chevachin. "Citizen Diplomacy to the UN: an Interview with Patrick Sciarratta." International Youth Journal, 14. June 2019.